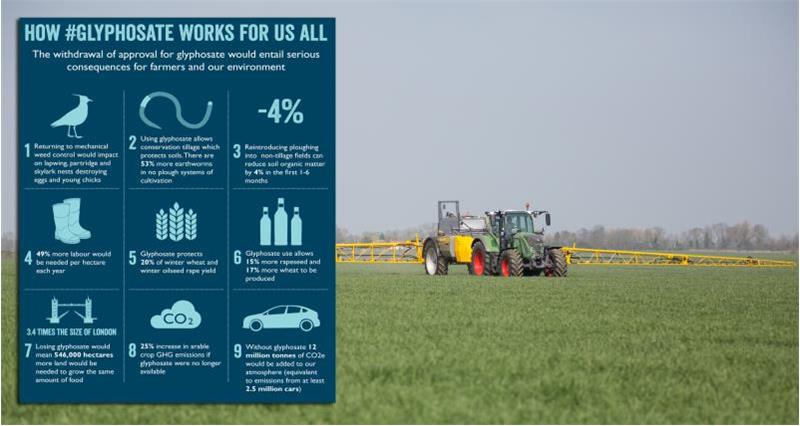 The NFU has today welcomed the announcement that the active substance glyphosate has been re-authorised for an 18-month period with no additional conditions of use placed on it.

The NFU continues to push for the expected 15-year authorisation of the world’s most widely use weed-killer on behalf of its farmer members. The NFU’s infographic launched today aims to communicate more effectively why glyphosate works for farming and the environment.

NFU Vice President Guy Smith said: “After many delays to any re-authorisation of glyphosate we’re pleased to see a positive decision has been made for agriculture. It is a welcome endorsement from the Commission of science-based decision-making.

“We appreciate this 18-month period is well below the 15-year re-approval expected and politics has played its part in interfering with this; members can be assured that our goals have not changed. The approval of glyphosate offers an endorsement of the scientific scrutiny from EFSA, helping to maintain the competitiveness of agriculture,  protecting the environment and  allowing farmers to keep food safe and affordable.

“We also welcome the fact that no additional conditions of use have been placed on the use of glyphosate – something the NFU has been pushing for.

“Echoing Commissioner Andriukaitis, it is important to clarify that once an active substance is approved – or renewed at EU level – it is then up to Member States to authorise the final products put onto their respective markets.

“I’m keen to see a science based approach free of politics and immune to the scare mongering we have clearly seen on glyphosate.”