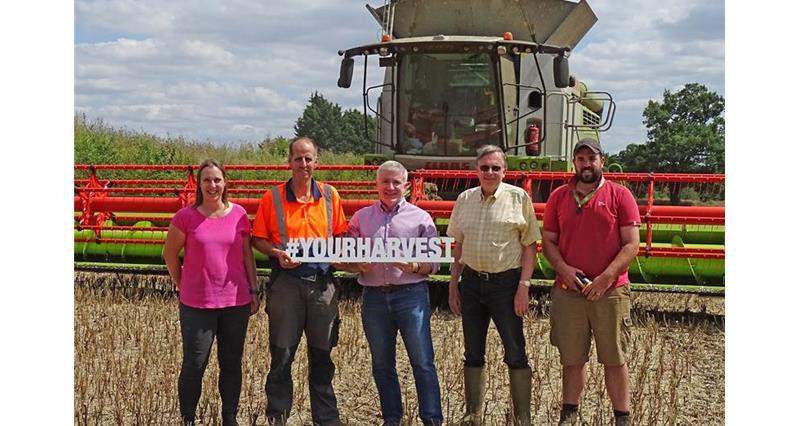 A Hertfordshire MP has seen how farmers are bringing in the harvest as part of a new NFU campaign.

Mark Prisk, MP for Hertford and Stortford, spent time in a combine harvester cab at Little Blakesware Farm near Hadham Cross, as farm manager Gordon Paice and his team harvested a field of oilseed rape.

He was there in support of the NFU’s #Yourharvest campaign, which aims to highlight to MPs and the public how the arable sector provides the raw ingredients for the UK’s £120 billion food and drinks industry, as well as performing a vital environmental role.

Mr Prisk said: “It’s great to see harvest in action and to understand both the commitment of local farmers and also the investment for the future that they are making.

“It demonstrates why farming is so important for the future of our food but also for the quality of our local environment.

Mr Paice explained that the farm is part of a joint venture covering 5,500 acres of land. As well as oilseed rape, crops that will be harvested this year include barley, oats for Jordans Cereals and milling wheat.

NFU Hertfordshire County Adviser Rosalind David said: “There has never been a more important time to talk about the role that farmers play in managing the great British countryside and in producing our food.

“The #Yourharvest campaign is an opportunity for farmers across Hertfordshire to proactively talk about the millions of tons of grain we produce, how we produce it and what that contributes to the UK.

“We’re grateful to Gordon for taking a couple of hours out of harvest, during this busiest time in the farming calendar, to help champion our fantastic food and farming industry.”