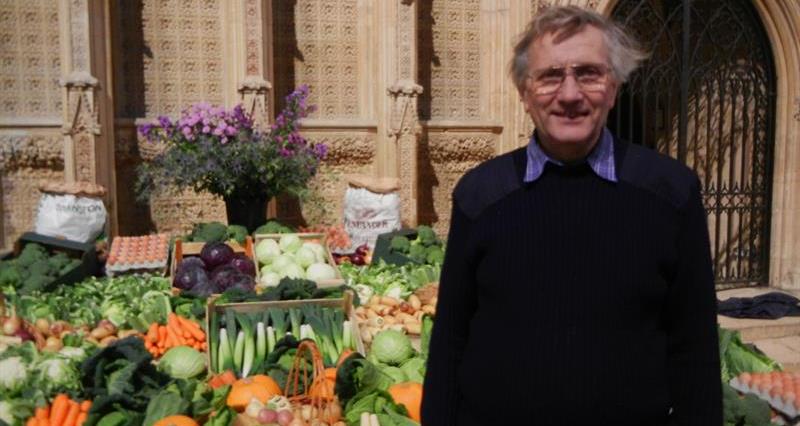 Lincolnshire livestock farmer, local vicar and much-loved friend, David Creasey, died on Sunday 30 December. He had been ill for a number of years, but when it came, the end was sudden and unexpected.

David, 72, from Hanthorpe, near Bourne, was a third-generation farmer, a friend to many and a well-known figure in many spheres of Lincolnshire rural life. He is survived by his wife, Fiona.

Born and raised on the family farm at Hanthorpe, David attended Shuttleworth Agricultural College, in Bedfordshire, before undertaking a degree in agricultural economics at the University of Wales, Aberystwyth. He was then employed by Shuttleworth College as a lecturer before returning to manage the family farm.

David held office in the NFU, both as chairman of Bourne local branch then as Holland (Lincs) county chairman in 2000. David was elected chairman of the NFU’s Lincolnshire and Nottinghamshire livestock committee at a crucial time for the livestock sector – he was in the chair at the time of the BSE crisis in the mid-90s and represented his fellow farmers in many discussions, in the media and at farmer meetings around the country.

The issues BSE caused for farmers, coupled with David’s passion for farming led him to become involved in promoting local produce: he was a founder director of Lincolnshire Quality Beef and Lamb, a livestock marketing co-operative established to promote Lincolnshire’s wonderful produce. And he was a committee member of the Lincolnshire County Food Group, which organises the biennial Lincolnshire Poacher competition and awards, promoting the excellent food produced by local butchers throughout the county.

David’s greatest passion was for his beloved farming community. Following on from the BSE crisis and its subsequent financial and emotional fall-out, David was aware of the need for a support mechanism for farming families. Together with Rev Canon Alan Robson, Lincolnshire’s Agricultural Chaplain, in 1999 David and other like-minded farmers formed what was then called the Lincolnshire Rural Stress Network.

As a founder board member and trustee of LRSN, he was also intimately involved in its day to day operation: he manned the helpline and was a caseworker, helping Lincolnshire’s rural families not just through the aftermath of BSE, but during many other difficult times. As a member of the farming community he was well-placed to understand and help with the problems the industry faces. And as the mainstay of LRSN, he also became a mentor for both staff and volunteers, developing the network of support and services that LRSN delivers today.

David had always felt a calling for the church and finally in his early 60s, he achieved that dream. He was ordained a non-stipendiary Priest in the Diocese of Lincoln in 2007 and regularly delivered services in his local area, but also in the wider Lincolnshire farming community: he was much in demand for farming weddings, christenings and funerals. He was also chairman of the organising committee of the annual Lincolnshire Harvest Festival at Lincoln Cathedral, held every October, bringing together many organisations and people to give thanks for the great gifts of food, family and community.

Meryl Ward, chairman of Lincolnshire Rural Support Network said: “I was fortunate to know David in his work as trustee and caseworker for LRSN. His quick wit and courteous charm lit up our board meetings, and he gave generously and freely of his time to help and support those in need. The many tributes that have been given already speak of his wisdom, compassion and great zest for life. He was so modest but a remarkable man who will be greatly missed by so many people. Our thoughts are with his wife, Fiona.”

David was a kind, generous and compassionate man, a friend to many people, a listening ear for those in difficulty and a provider of sound advice for those in need of it. Nothing was ever too much trouble – he would offer guidance to anyone who asked or be a quiet companion in times of trouble. He was a strong advocate of doing what was right and standing up for his fellow farmers and those in the rural community. He had a quiet strength; his faith was unshakable and his love of the farming and the rural community was complete. David devoted his life to helping others.

David’s funeral will be held on Friday 25 January at 11am at St John the Baptist Church, Morton, Bourne. Further details will be available shortly.