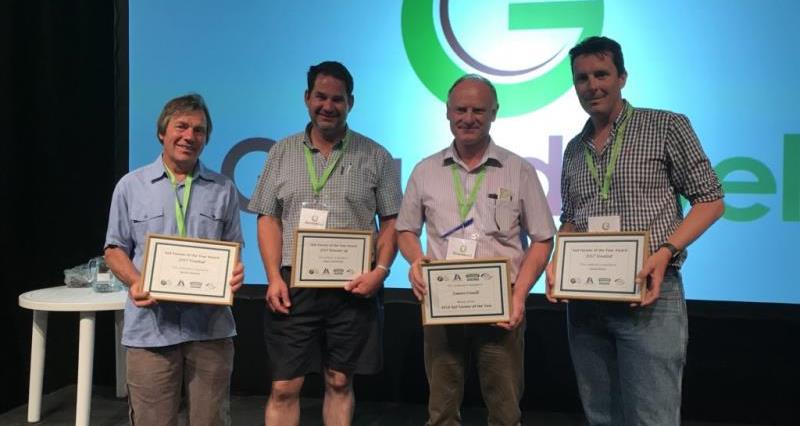 Simon Cowell, an arable farmer from Essex has been announced as the winner of the 2018 Soil Farmer of the Year.

The competition, now in its third year is organised by the Farm Carbon Cutting Toolkit (FCCT) and Innovation for Agriculture (IfA) and is kindly sponsored by NRM and Cotswold Seeds.

The competition aims to find famers and growers who are engaged with, and passionate about managing their soils in a way which supports productive agriculture, reduces greenhouse gas emissions, and builds soil health, organic matter and carbon.

Simon farms 400 acres of heavy clay soils with a large acreage below sea level, growing a variety of crops.  He has been working on improving his soils for the last two decades, moving to a no-till system 12 years ago, being flexible with management and rotations to prioritise soil health.

Simon has been chosen as the winner this year due to the enthusiasm and passion for which he manages his soil, as well as his pioneering attitude to trying new things. He focusses on building soil health with a combination of no tillage, the use of homemade compost and the use of a diverse rotation which in turn grows healthy plants allowing for a reduction in inputs.

Simon explains, “Having been trying to improve my soil for over 20 years, the more I understand the working of my soil, the more I realise how little we know. I have learnt so much from other farmers including previous winners and finalists of The Soil Farmer of the Year.  I thought that now it was my turn to step forward and share my experiences with anyone who is interested. ”

Second place for this year’s competition has been awarded to NFU member Angus Gowthorpe, who farms 400 acres in York with a mix of arable crops and grassland for his pedigree cattle business. Managing a variety of soil types, from blow away sand to heavy clay, Angus has completely changed the focus of his management strategy to concentrate on soil health, not just for the benefit of the business and to sustain the next generation but also the wider environment. Angus made the move away from tillage 5 years ago and has seen the soil structure start to improve - especially on the heavy land.

The judges recognised Angus’s dedication to his soil management and the steps that he had taken to change his system. The health of his crops and soil were evident during the judging visit and the number of worms present in the fields defied belief!

Angus comments, “I am delighted to have come runner up in this year’s Soil Farmer of the Year competition. It’s fantastic to be recognised for the work I am doing on the farm to improve our soils and the wildlife that it supports. Receipt of this award spurs me on to further improve our soils through diversity of plants and reduced ‘bag and can’ farming, leaving the soils in better health for the next generation.”

The accolade of third prize was taken by another NFU member, Will Steel from Kent. Managing a 210 hectare mixed farm, Will was awarded third prize for his fantastic attitude towards building soil health but also his determination and belief in making it work as a farm manager. The farm has been transformed from a ‘derelict farm’ into a place where soil management takes priority and is sustained for the long term.

Will is “absolutely delighted to have been placed third, given the quality of the other entrants in this year’s Soil Farmer of the Year competition and to get the recognition for all the ‘tinkering’ over the years on what can be some interesting High Weald soils. I hope the knowledge that I have gained over the years of improving my soils can be passed onto the next generation of farm managers and encourage them to see what can be done for your soils, biodiversity and the environment on a budget.”

The top three farmers will also all be hosting farm walks who are open to anyone who is interested, where there will be a chance to see, understand and dig a bit deeper into what they are doing.

Further information can be found here.

David Gardner, FCCT Director said “In the third year of running this competition, it is fantastic to see such amazing farmers sharing their soil management stories.  Yet again there was a lot of strong applicants, and it was a hard decision on who to shortlist as well as to decide the final result.  We appreciate the effort all entrants put in to the competition. Simon, as our winner was demonstrating exceptional management, and has even brought some ‘bounce’ to his heavy clay soils. This demonstrates that even the most difficult soils have the potential to be improved.”

The top three famers will all receive prizes of fertility building or green manure seed from one of the generous sponsors of the competition, Cotswold Seeds.