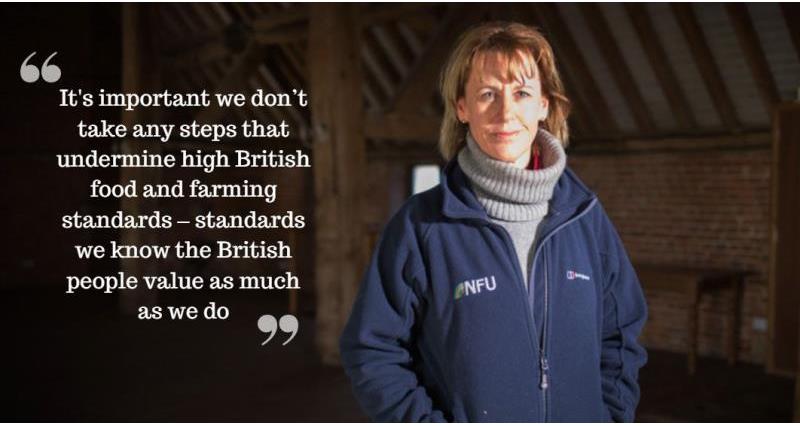 Farmers need to be at the heart of a future domestic agricultural policy with food production at its core, NFU President Minette Batters said to the Defra Secretary of State Michael Gove today (Monday 30 April).

At a joint NFU and Defra consultation event on the government’s ‘Health and Harmony’ command paper, Mrs Batters said that farmers must be engaged and empowered to deliver the reforms that are coming to ensure farming can continue to benefit the country.

The NFU has been urging its members to complete the government’s consultation and has undertaken a nationwide series of meetings to gather their thoughts, ahead of its own consultation submission.

At the event, Mrs Batters said:

“Food production is at the heart of everything we do. While there are a whole host of endeavours we turn our hand to – energy provision, rural tourism, business services, environmental management – if we’re not producing food we’re not farmers.

“And as food producers, we deliver so much for the country that sometimes goes unrecognised – the management of our treasured landscapes as occupiers of over 70% of the UK landmass; growth, investment and employment in rural businesses as well as in our hugely successful food industry; and a secure and reliable supply of food, delivering affordable, trusted and safe produce to all the British public regardless of where they live or what their income is.

“Not only is it important that this is recognised, but also that we ensure, in an uncertain future, we don’t take any steps that undermine those high British food and farming standards – standards we know the British people value as much as we do.

“We must also take a close look at the standards of the food we import. It would be short sighted to pursue a policy that reduces British food production and means this country relies increasingly on food produced elsewhere in the world where we have little control over how it was produced.

“During the last few months I’ve been heartened to see a growing enthusiasm for change – but there remains understandable apprehension about the speed and scope of reform.

“And this leads me to a critical point. Farmers must be engaged and empowered to deliver the reforms that are coming. Otherwise there is a real risk that any future changes could be to the benefit of no-one.”