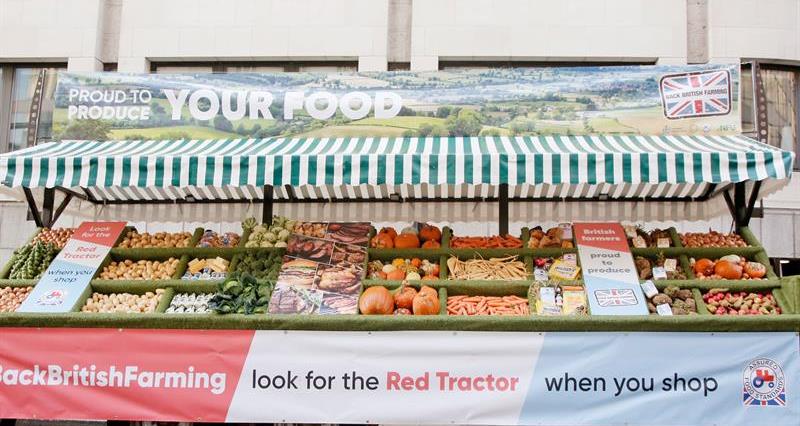 Fresh, seasonal British produce, proudly produced by NFU members across the country, has been donated to charity to provide more than 5,000 meals to help feed people in need across London.

The food including apples and pears, pumpkins, potatoes, onions, cabbages and carrots, formed part of the British Market Stall display in the Worshipful Company of Farmers entry at this year’s Lord Mayor’s Show, supported by the NFU.

City Harvest, the London-based food distribution charity, will deliver the produce to organisations that arrange meals for homeless shelters, soup kitchens, centres for the elderly, and refuges for women experiencing domestic violence.

NFU Vice President Stuart Roberts said: “I’d like to thank all those NFU members who supplied the vast array of fresh, seasonal British produce, all 2.2 tonnes of it, for the Market Stall display in the Lord Mayor’s Show parade.

“Obviously it was essential that the food wasn’t wasted so I was delighted that we were able to donate all of it to the City Harvest charity. They do fantastic work in collecting perfectly good and nutritious food that would otherwise go to landfill. The produce supplied by British farmers is the equivalent of more than 5,000 meals which will make a huge difference to those people across London in need.”

Laura Winningham, Chief Executive Officer, City Harvest London, said: “We are thrilled to have collected the food from the NFU. Nutrition and the absolute right to food is what drives us, especially knowing there is more than enough food to feed London, if re-distributed and managed efficiently."

Image attached of the British Market Stall display of food at this year’s Lord Mayor’s Show.

The Worshipful Company of Farmers entry in the Lord Mayor’s Show 2019 was supported by the NFU, Red Tractor, Massey Ferguson and Surrey Docks City Farm.