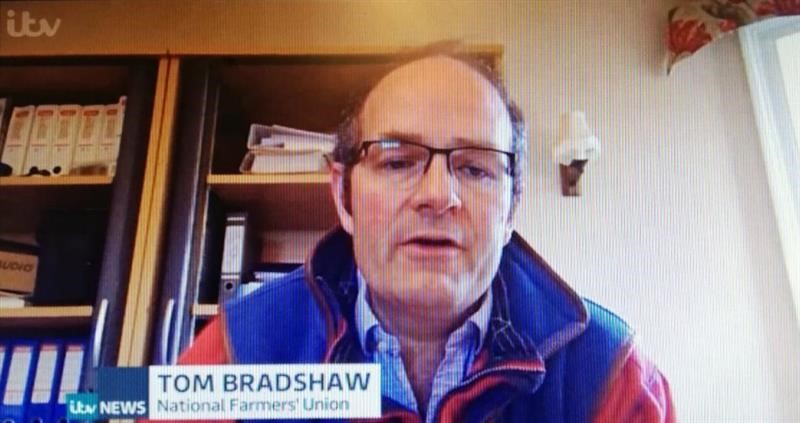 The 'Pick for Britain' scheme came back into the spotlight at the beginning of this month and NFU horticulture and potatoes board chair Ali Capper was quoted in a Daily Mail article discussing the physical demands of working as a picker.

As the picking season drew closer many outlets started to ask what would happen to this year's seasonal workforce and what would replace last year's 'Pick for Britain' campaign. NFU Vice President Tom Bradshaw began his series of interviews on the subject with a quotes in the Financial Times and the Daily Mail.

NFU Vice President Tom Bradshaw and member Alex Newey featured in a Financial Times article that reports that ornamentals could go unharvested this year after the multibillion-pound sector was not included in the seasonal workers' scheme.

NFU Vice President Tom Bradshaw was featured in a Guardian article discussing the extension of the seasonal agricultural workers’ scheme, which will allow farmers to bring in 30,000 seasonal workers from overseas in 2021 – three times more than 2020 – to help pick and pack fruit and vegetables.

Times Radio interviewed salad grower and NFU member Nick Ottewell to discuss the effect Brexit will have on his seasonal workforce and the 'Pick for Britain' campaign. He also explained the importance of having a migrant workforce.

The Sunday Times reports concerns around seasonal labour for the daffodil harvest, which will be one of the first recruitment challenges for a post-Brexit Britain. NFU member and daffodil grower Alex Newey is featured alongside NFU Vice President Tom Bradshaw.

The NFU's most recent seasonal labour survey revealed that UK residents made up only 11% of the seasonal workforce this year despite the high-profile Pick for Britain campaign to recruit domestically. The news was given to the BBC as an exclusive.

BBC News at Six featured an interview with NFU member and Gloucestershire grower Martin Haines from his farm who is currently harvesting pumpkins, who explained that the the interest for picking roles from domestic workers is not forthcoming. 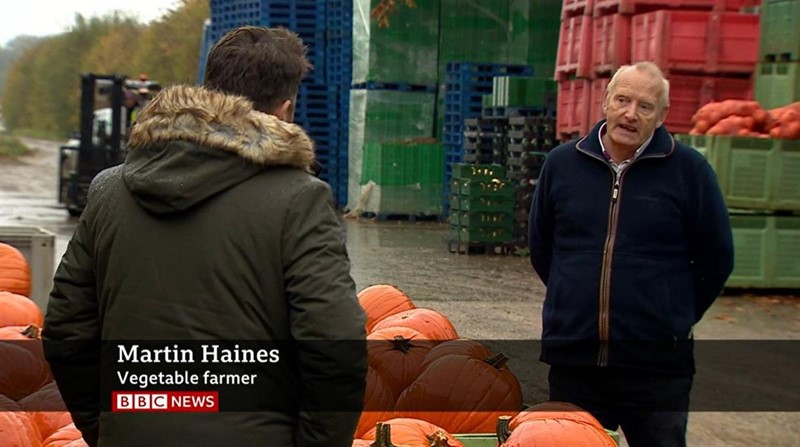 NFU Vice President Tom Bradshaw is quoted in BBC online, explaining that growers of flowers, fruit and veg still don't know how they will recruit experienced workers next year.

On BBC Farming Today, Tom reflected on the survey results and reiterated the NFU's call for clarity.

Financial Times also covered the story and the NFU's warning that time is running short to recruit workers for next year's harvest. The piece featured comments from Tom Bradshaw, horticulture board chairman Ali Capper and vice chairman Derek Wilkinson. 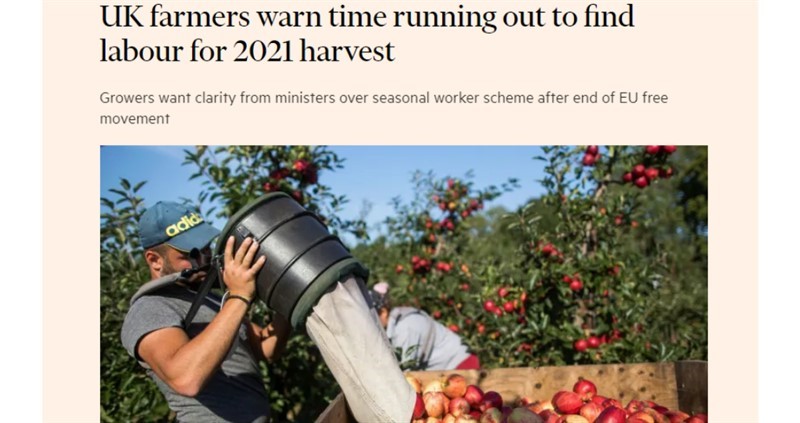 The Financial Times reported that growers are turning to robotic harvesters as a long-term solution to the labour gap. NFU horticulture and potatoes board chairman Ali Capper is quoted reiterating the point that robots will be plugging a shortage, rather than taking jobs, emphasising that “first-world economies just do not pick their own fruit and vegetables" because such roles are temporary and seasonal.

The Financial Times reports how the lack of a workforce from Eastern Europe this year has foreshadowed Brexit difficulties. NFU Vice President Tom Bradshaw highlights the success of the Pick for Britain campaign and NFU horticulture and potatoes board chairman Ali Capper is quoted explaining that the NFU is preparing an assessment of cost increases to share with government and supermarkets.

NFU President Minette Batters emphasised on BBC Radio 4's PM and Today programmes that we now have an opportunity to produce more food domestically and that British workers could also be trained to carry out seasonal roles on farm.

For all the latest coverage on the impact of coronavirus on access to labour, visit our coronavirus media coverage hub.

As the Government announced it's new points-based immigration policy, the NFU featured heavily in the media emphasising that any immigration policy must reflect the importance of food and farming and deliver for its needs.

NFU President Minette Batters was interviewed on BBC Radio 4 Farming Today where she stressed that a lack of access to overseas workers, both seasonal and permanent, risks downsizing domestic food production.

The National Farmers' Union's Ali Capper reacts to government plans to stop offering visas for low-skilled workers: "We are the only country in Europe that is trying to ignore the fact that workers come from elsewhere to do these jobs"@Matthew_Wright | @AliCapper | #Immigration pic.twitter.com/y9c7Xdfoft

As well as broadcast media, the NFU's response featured across national newspapers. You can read the articles here:

There was plenty of media coverage on the NFU's call for the government to expand the Seasonal Workers pilot scheme after its Labour Providers Survey showed a significant shortage of workers in September.

The shortage of seasonal workers was the leading story on ITV News, and NFU horticulture and potatoes board chairman Ali Capper was interviewed highlighting the impact it is having on farms. The piece also cited statistics from the NFU’s Labour Providers Survey. 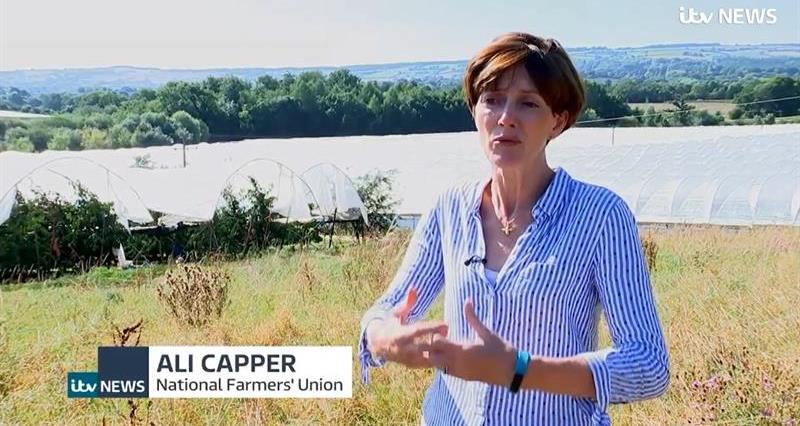 Ali was also interviewed on BBC Radio 2’s Jeremy Vine programme to explain why there has been a shortfall of seasonal workers on farms. 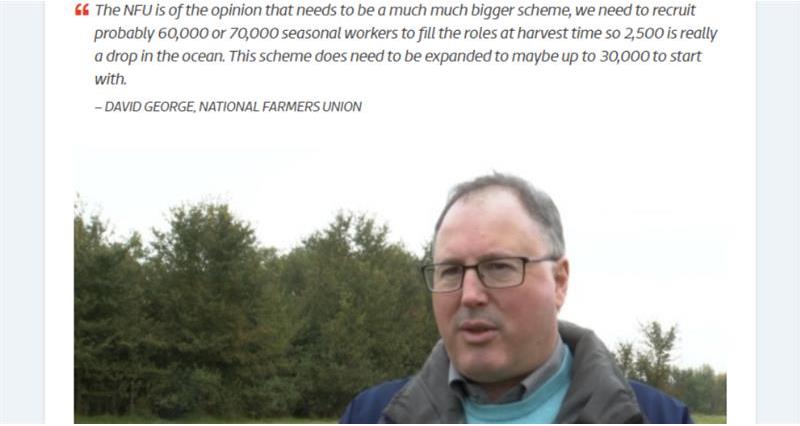 NFU member Martin Haines featured on BBC Radio 5’s Wake Up To Money discussing labour shortages and how it is impacting his pumpkin harvest. 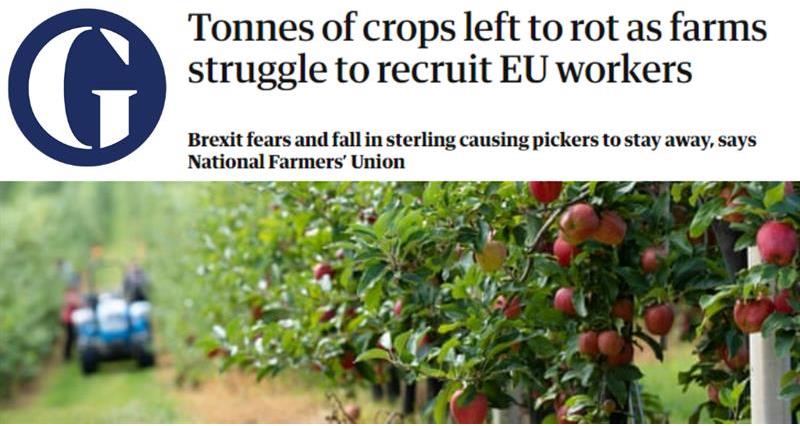 You can read the articles here: 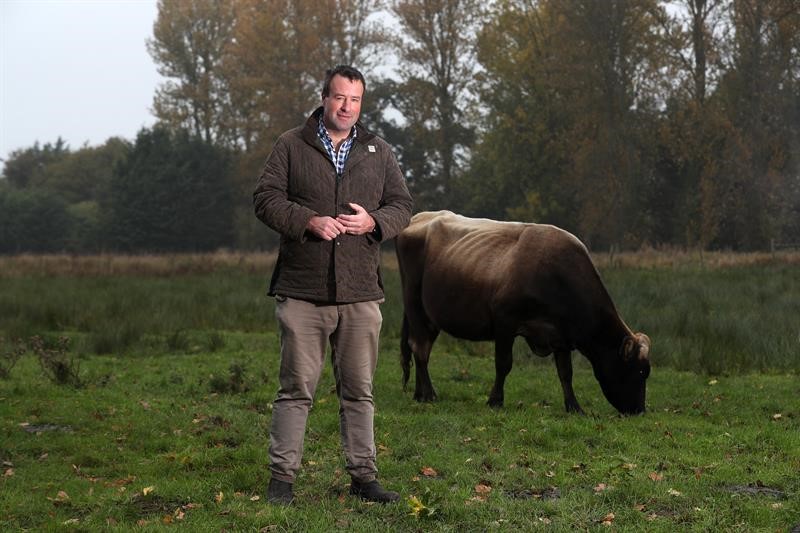