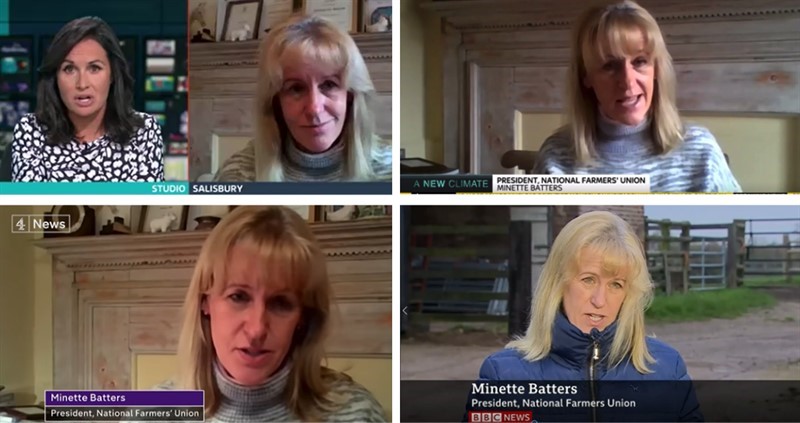 NFU director of trade and business strategy Nick von Westenholz was quoted in a Financial Times article which analysed the difference between previous EU trading and the new 'Global Britain' scheme.

Concerns around import checks have continued to rumble on in the media. Before the government announced it would be delaying physical checks of agri-food products at border posts for at least another six months, The Guardian reported that ports would not be ready to implement the necessary checks by the original date of 1 July and included warnings from the NFU about the impact on livestock trades.

The Independent covered the publication of the Trade and Agriculture Commission report as well as the NFU’s reaction.

NFU President Minette Batters was quoted in a Daily Mail article about a surge in people buying home-grown food during the pandemic and following Brexit. Sales of British lamb have risen 14% year-on-year, according to Kantar. Mrs Batters said: "With businesses facing new challenges trading and exporting, the continued support of the public is invaluable."

The Guardian, and The Telegraph quoted NFU chief livestock adviser John Royle following reports that since 1 January, no cattle, sheep or goats had left the UK for mainland EU markets.

The NFU was also quoted by the BBC after Portsmouth City Council's announcement that it has a lack of funding to build the facilities.

As the new year progresses and we begin to see what the EU UK trade deal means for farming, the Independent reported comments by NFU director of trade and business Nick Von Westenholz, made to a House of Lords committee, that initial issues with the EU will get bigger in the future.

Also speaking on the subject was chief livestock advisor John Royle, who suggested that a lack of facilities at borders needed to be addressed, as reported by the Financial Times and the Daily Mail.

With a New Year comes a new trade deal, NFU President Minette Batters talked to Anna Hill on BBC R4 Farming Today about the EU trade deal and its effect on farmers. Listen from around 9 minutes.

Minette's New Year's message was also quoted in the Daily Telegraph and the Mirror as she discussed the seismic changes facing the sector.

NFU President Minette Batters was interviewed live on Sky News as it was announced the EU and the UK had reached an agreement. Minette told presenter Dermot Murnaghan "the NFU had always been clear that maintaining tariff-free access to the EU market was absolutely crucial for British food and farming".

There were also mentions of the NFU and its reaction to the deal on Radio 4's Today programme, Radio 2, Radio 5 Live, Times Radio and LBC.

Minette Batters shared her favourite songs on BBC’s Desert Island Discs. Throughout the programme, she discussed the current issues affecting farming, including the uncertainty farmers face as we approach the end of the transition period and the need for continued trade with the EU.

Deal or no deal?

As Brexit negotiations went down to the wire as we approached the end of the transition period, the NFU press phones and emails were busy with media enquiries asking how UK agriculture will be impacted particularly if there was a no deal scenario.

NFU President Minette featured on Sky News discussing the Brexit negotiations and the implications of a no-deal on British farming. 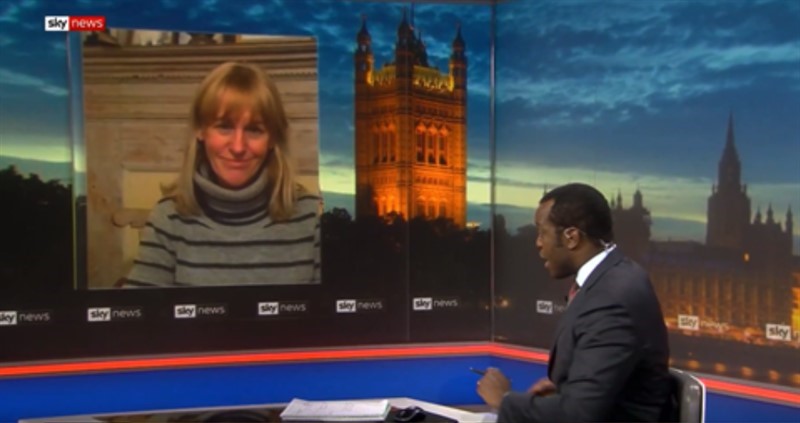 Minette appeared on BBC Newsnight this week where she explained how a no deal Brexit would be "catastrophic for British agriculture."

“We can’t underestimate the amount of restructuring that would need to happen in a no-deal Brexit… this is a massive massive game changer.”@NFUtweets President @Minette_Batters explains why she believes a no-deal Brexit would be catastrophic for British agriculture#Newsnight pic.twitter.com/GXUrp0HWPb

The President has also been doing a number of broadcast interviews including Times Radio, LBC, Radio 4's The Week in Westminster and Radio 4's The World This Weekend.

Busy weekend for NFU President @minettebatters doing the radio round:
✅ @BBCRadio4 The Week In Westminster with @elashton
✅ @BBCRadio4 The World This Weekend with Jonny Dymond
✅ @TimesRadio with @alexisconran
✅ @LBC with @TomSwarbrick1 pic.twitter.com/3sKEU0me1u

The NFU has also been talking to political correspondents at all the national newspapers too. Minette has been interviewed by The Guardian, and NFU Vice President Tom Bradshaw was interviewed by The Daily Express where he emphasised the uncertainty facing farmers here in the UK.

Meanwhile, NFU member and Warwickshire sheep farmer, Charlie Beaty, was interviewed by Sky News, to explain how her farming business would be impacted by a no deal.

Did you miss @GTFarmGirl on @SkyNews over the weekend? Don't worry, you can catch up with her here as she explains how a no-deal Brexit could impact her business ⤵️ pic.twitter.com/XRcO6QV9g0

Sunday Times did a feature with Cumbrian sheep farmer Richard Pedley who explained the challenges farmers will face in a no-deal situation. The online piece also features a video with NFU uplands forum chairman Thomas Binns.

NFU President Minette Batters appeared on the BBC News at 6 & 10 and ITV Lunchtime News saying that more clarity is needed about how the new scheme is going to work.

Minette was also interviewed on Channel 4 News, alongside NFU north west regional director David Hall and livestock farmer James Rebanks (known to many on Twitter as @herdyshepherd1) who reiterated that there are lots of questions that still need answering. You can watch the full feature here. 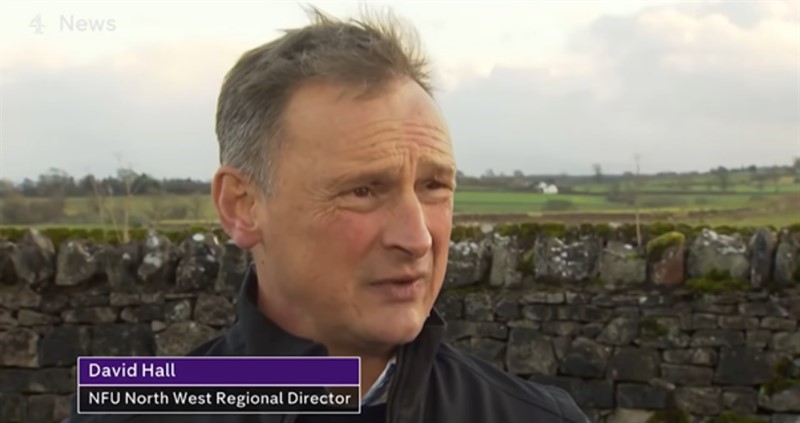 Well said @DavidatWestons 👏 As he highlighted on @Channel5N last night, food production and caring for the environment go hand in hand. Support payments need to help farmers deliver both.

Meanwhile, Vice President Tom Bradshaw took to the airwaves talking to national radio station talkRADIO (listen back from 7 mins). He told presenter Ian Collins about the opportunities a new support scheme offers sustainable farming in Britain, but only if "we get it right".

Hear from NFU VP @ProagriLtd who spoke to @iancollinsuk on @talkRADIO about the opportunities a new support scheme offers for sustainable farming in Britain - if we can get it right.

P.S. Keep an eye out for more coverage on the way! 👀 pic.twitter.com/2x5xYfj9c3

There was also plenty of coverage in the newspapers. The Times covered the 'new entrants into the industry - older farmers leaving' angle and interviewed NFU tenants group chairman and dairy farmer Chris Cardell and quoted combinable crops board member Sarah Bell.

Read more coverage of the transition roadmap and the NFU's response in:

As Defra announced plans that will see the biggest shake-up in agricultural policy in 50 years, the NFU was right across the media to highlight how the industry will be impacted.

NFU President Minette Batters was interviewed live on Radio 4's Today programme (7.10am) saying that despite government embracing many ideas for sustainable farming and food production, the funding gap will leave many farmers in a precarious position.

"My absolute focus is making sure that we have profitable thriving farming businesses that are producing climate-friendly food that ultimately can deliver what the public wants."

Times Radio aslo spoke to Minette on what the plan will mean for farm businesses in England (from 6.35am).

"We now have a global opportunity to lead on what sustainable food production looks like.

"We believe with the right incentives farming absolutely can get to net zero."@Minette_Batters https://t.co/5YcsvRz248

Minette featured on Sky News and was quoted in the online story, while BBC News quoted Minette in its online article.

Catch up with @Minette_Batters on @SkyNews this morning about the agricultural transition plan and the detail that is still needed from government 👇 pic.twitter.com/JY1bcnjIXX

The roadmap announcement featured in most national newspapers and was the front page story in The Times, featuring a comment by Minette. The Times also focused on new entrants entering the industry including an interview with NFU Student & Young Farmer Ambassador Matt Rollason.

Read more coverage on the government's transition roadmap and the NFU's response:

BBC Radio 4 Today looked at what the Chancellor's spending review will mean for young people across the UK. NFU Student & Young Farmer Ambassador Matt Rollason was interviewed saying that government must commit money to limit border and customs disruptions at the end of the transition period.

Great to hear NFU Student & Young Farmer Ambassador @MatthewRollaso1 on @BBCr4today this morning talking about what he wants to see in the @RishiSunak's #SpendingReview 👏 Also online here - give it a read!https://t.co/JIq0Dn3Uxt pic.twitter.com/4kG0sGsQz8 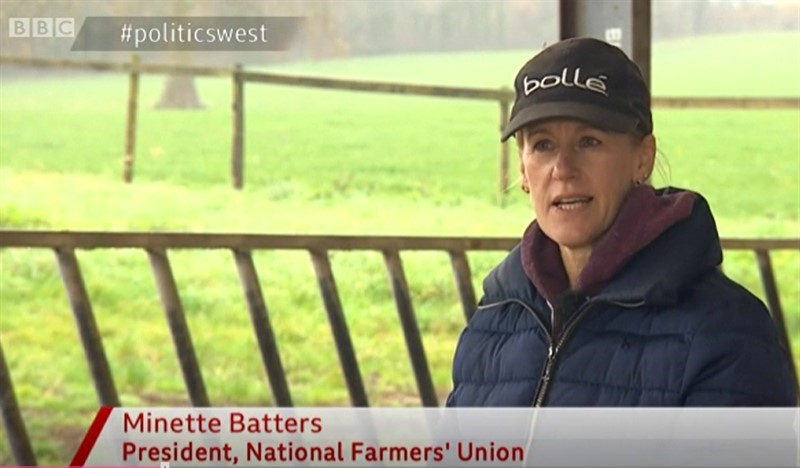 Reaching a trade deal with the EU

Jeremy Warner, assistant editor of The Daily Telegraph, wrote a piece in the paper on UK/EU trade and quoted NFU President Minette Batters saying that no-deal would be the biggest shock to UK farming since repeal of the Corn Laws nearly 200 years ago.

NFU President Minette Batters was interviewed on BBC Radio 4's Broadcasting House where she stressed the need for as free and frictionless trade as possible with the EU. Listen back from 32 mins.

#ICYMI NFU President @Minette_Batters was on @BBCRadio4 this morning talking about the importance of food & farming at what is a critical time for British agriculture.

Catch up from 32 mins 👉 https://t.co/OJVzXEridr

Financial Times reported that more than 70 British business groups including the NFU, CBI and BRC have issued a joint call for both UK and EU leaders to find a route through and strike a deal. NFU Director General Terry Jones is quoted in the piece outlining why it's vital that a tariff-free, quota-free deal is struck as soon as possible. Daily Mail also covered the story.

Andrew Burgess and John Pawsey, the current and previous chairmen of the NFU's organic forum, featured in Financial Times about the potential ban on organic exports to the EU from 1 January if organic certification is not recognised after the end of the Brexit transition. 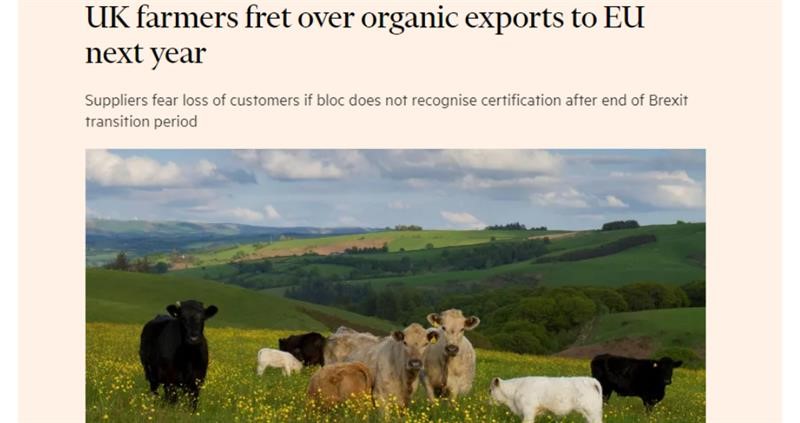 Andrew Burgess was also interviewed on Politics East about the issue and how farmers are stuck in limbo waiting for certainty.

Read our coverage on the Agriculture Bill, trade and standards here.