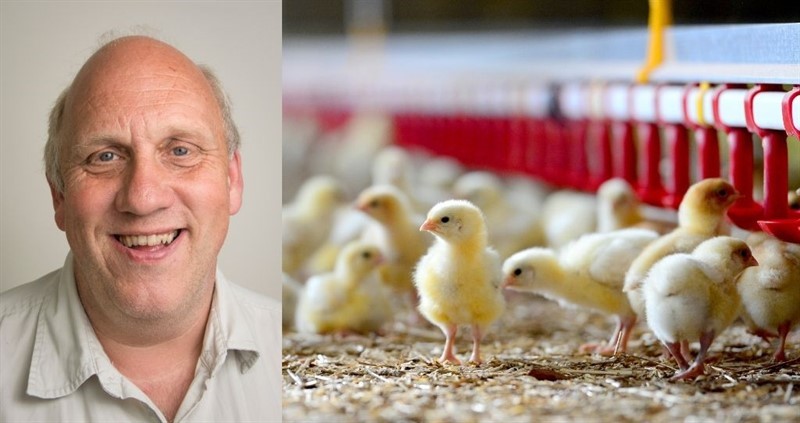 Earlier this year NFU national poultry board vice-chair Phill Crawley trialled three carbon calculator tools from the perspective of his laying hen business. This time round the focus was on broilers, testing the three most common and freely available carbon calculators: AgRE Calc, Cool Farm Tool and Farm Carbon Calculator.

Simon Barton and his wife Karen left London in 1997 and set up the poultry farm in Somerset which now has 200,000 birds over two sites, producing 1.2 million standard and RSPCA Assured broilers each year.Simon is the chair of the South West Poultry Board and volunteered to trial the calculator tools to help contribute feedback to the NFU’s net zero steering group.

The aim of the trial was to test each calculator’s functionality and ease of use, as well as how useful each was in representing a poultry farm’s emissions. Most importantly, the trial helped highlight areas where the calculators could be further improved for the poultry sector.

Why use a carbon calculator?

Every farm will be starting from a different point and will need its own unique action plan in order to contribute towards net zero targets. Carbon calculators can be used to assess the emissions sources on farm and help inform what actions farmers and the wider industry could take in tackling climate change and working towards a net zero carbon footprint for agriculture as a whole.

What sort of data is required?

Each of the calculators asks for data to be input in different ways and some calculators ask for more detail than others. It is important to watch what metrics are asked for – some use tonnes but others use kg. Simon spent a couple of hours gathering the data needed beforehand, which made the process of testing the calculators much easier. The following data was required:

Developed by the Farm Carbon Cutting Toolkit organisation, the Farm Carbon Calculator is free to use with an unlimited amount of footprints available. It provides a carbon balance looking at emissions and sequestration.

This is what Simon said about this tool:

“It was difficult in places to understand exactly what the tool was asking for, so we had to go back and edit the information to come out with a sensible result.

“The tool allocates a carbon footprint to any buildings under 10 years old and allows you to customise the size of each shed to match what you have on farm. It also had a big range of fuels available to choose from, including biomass inputs such as wood pellets or chips that would suit many broiler farms. On the downside, the units often did not match my records, for example I buy wood chips in cubic metres and the tool asks for kilograms, which we then had to estimate.

“It also allows for carbon sequestration, so you can add any hedgerows or trees on farm. This is unlikely to be of interest to many barn-reared broiler producers, but even the small amount of hedgerow we have on farm provided a reasonable carbon sequestration figure.

“The feed inputs were not suitable for poultry as it asks for quantities of individual raw materials used per year. This had to be estimated as compound feed labels rarely display full formulations.

“Things I liked most about this calculator were that the results were really visual and quite easy to interpret and you could easily see the factors that were contributing the most to your footprint.”

SAC Consulting developed this calculator and it has been endorsed by the Scottish government.

Simon commented: “AgRe Calc wasn’t as user friendly as the other two tools, but to me it felt the most poultry friendly. It was the only one that included options for organic and free-range production. It also allowed you to select bedding material and choose the relevant compound poultry diets from a list rather than having to work out individual raw material usage on your farm.

“The end report was a bit confusing and it wasn’t immediately clear what my overall figure was.”

The Cool Farm Tool (CFT) provides product footprinting only, making calculations for mixed farming enterprises difficult. It is initially free for farmers with five product footprints available before a fee is required. Organisations that use the CFT to support sustainable agriculture pay to become members of the ‘Cool Farm Alliance’ which gives additional functionality.

Simon said: “As with the Farm Carbon Calculator, the language used was not very poultry friendly, it categorises livestock into ‘herd phases’ which don’t translate to UK poultry production. It didn’t allow for manure disposal either and assumed it was spread or stacked on farm rather than sold as an output.

“The downsides to this tool were that there was no opportunity to enter sequestration factors, and for mixed farming operations this calculator would be quite time consuming as you’d have to run it several times for each farming activity. However, for a single run through, it was quite quick to use.”

Simon concluded: “None of the calculators as they stand worked particularly well for broiler chicken production, however each calculator had its own benefits.

“To me the AgRE Calc tool felt like it was the best fit. Given that feed use is likely to be the biggest single factor in poultry’s carbon footprint, it’s important that tools reflect that accurately.”

The NFU is in continuous discussion with the carbon calculator developers to ensure that members’ voices are heard. Feedback gathered from this trial will be used to suggest ways to improve usability for poultry members, ensuring calculators are as relevant and useful to the sector as possible.

Key elements of the feedback from the trial with Simon as part of this ongoing work included:

How do I make a start with my own carbon calculation?

Check out the NFU’s Farm Status Indicator, which provides a quick and simple way to get started. While it is not a carbon calculator, it is a useful introductory tool and provides a score from one to five on your farm’s first steps towards net zero.