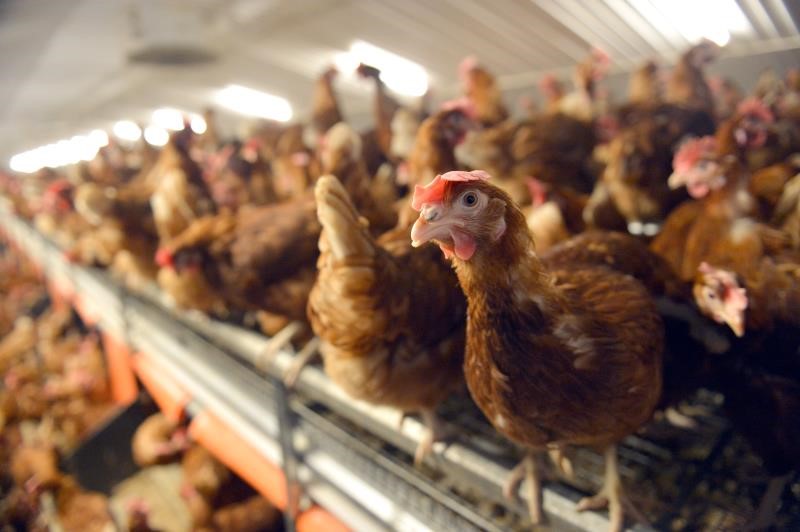 The Laying Hen Welfare Forum (LHWF), which the NFU sits on, has pulled together responses from producers of 29 flocks looking at how to reduce injury due to feather-pecking in laying hens. Read on for more information.

Over two-and-a-half years, the group developed a Maintaining Feather Cover in Laying Hens report that recommends a series of tools to reduce injurious pecking (IP).

A principal aim was to examine the feasibility of developing and implementing a Feather Cover Action Plan (FCAP) bespoke to each farm and in all systems of housing for laying hens. Producers were recruited that had varying attitudes, from not regarding FCAP as a priority to engaged first adopters. Action plans were successfully co-created by the project research officer Paula Baker, a trained and experienced facilitator. Implementation and welfare interventions and outcomes were then measured during several visits.

While some changes were inexpensive, such as providing rope, plastic objects or balls in-house, others were capital investments like verandas or planting trees, installing artificial shelters to encourage ranging, continually replenishing lucerne or removing capped litter. For free-range farms, 67% of planned changes had been achieved by the second project visit. Some tried innovative approaches, such as a trial of pecking rings in an enriched cage system to determine whether they could assist in keeping non-tipped birds, but they didn’t help maintain feather cover compared with control birds in the same house.

The support of an experienced, trained facilitator was a major factor in maximising the willingness of producers to improve feather cover. And high adoption also indicates that FCAPs could successfully be implemented nationally with sufficient motivation and engagement. However, if this is an addition to the flock Veterinary Health and Welfare Plan, the associated costs will need to be explored and accounted for.

Producers commented that their main motivators for the maintenance of good feather cover were:

To help achieve this, producers suggested the incentives were:

Increased knowledge exchange supported by the industry was also perceived as helpful. Producers recognised that being part of the project:

They recognised the value of facilitator support and noted the motivational aspect that successful outcomes gave towards further progress. Half the producers felt their FCAP had been successful in reducing IP within their flocks.

Barriers to implementing planned changes were few but included:

Egg producers had to decide, given the costs, would there be sufficient benefit?

A small proportion of producers had opportunities for change restricted by their housing system.

An LHWF visit to Austria in June 2019 indicated key factors in their ability to manage intact-beak flocks were higher egg prices in a small home market, smaller, family-run farms, verandas on all housing (EU grant-funded) and delaying access to the range until 26 weeks of age. Other advantages included bespoke rearing as part of the integrated and supportive industry structure based around one main genotype in a national flock size of 6.9 million hens.

A visit to the Netherlands suggested that some producers were facing challenges managing intact beak flocks to meet the demands of their export market and that their industry was prepared to accept poorer feather cover than would be the case in the UK. A move to white genotypes was felt to be easier to manage as intact beak flocks (2018 data 35:65 ratio of brown to white birds). The first flocks managed without beak tipping saw average mortality rates increase from 5% to 9%, and it was felt that high nutrient feed with at least 5% fibre was beneficial. While both visits were useful, there remain important differences to the UK, notably the number of commercial free-range hens kept in the UK (26 million – 2019 data) versus Austria (1.6 million) and the Netherlands (6 million).

Back in the UK, in terms of bird welfare outcomes, 62% of birds in the study had good feather cover at all ages. There was no significant difference in the feather cover measured at the two visits, which reflects the many variables at the time of measurements, including a very wide range of bird age (17-82 weeks), the fact that approximately half the producers had a change of flock between visits and the sample size.

These uncontrolled variables likely account for the lack of association found between feather cover and the number of strategies adopted from the FCAP; litter quality; levels of engagement or motivation. However, these comparisons were not the focus of the study. The focus was to trial an approach to motivate producer uptake of evidence-based strategies to tackle IP.

In about half of free-range flocks, gentle, severe and aggressive pecking behaviours were not seen during the formal observations and in the others were low incidence.

As well as providing enriched ranges, participants provided numerous kinds of enrichment in housing – all of which the birds were seen to engage with and peck at during short periods of formal observation. Litter in free-range and barn aviary housing was predominantly friable owing to producers paying attention to litter quality by adopting strategies. The project demonstrated that FCAPs can lead to changes in flock management with facilitated support using an approach based on motivational interviewing.

The LHWF recommends that facilitation training is made available to enable the successful rollout of FCAPs nationwide and that grants are made available for producer and stockperson training, and financial incentives are given to recognise those maintaining well-feathered flocks.

It is also suggested that an innovation fund is available to support producer-led trials of innovative practices to maintain feather cover, where moderate infrastructure or equipment changes are required.

Knowledge exchange (KE) achieved high levels of engagement using many formats, concentrating on preferences expressed by the producers for receiving information on managing feather cover. There were seven workshops with producer discussion groups, five with a range of stakeholders and seven articles published in the poultry industry press.

Videos are a preferred route for KE, so professional quality videos filmed on commercial farms participating in the study were created. The LHWF website – www.lhwf..co.uk – was developed and now contains a comprehensive resources page of information for managing IP to maintain good feather cover, which includes links to the videos and the well-used Featherwel website.

Twitter proved the more popular social media site with 130 followers and over 100 tweets: the Facebook site attracted only 28 followers. An open-access paper has been published as part of a virtual conference at which we presented a video summary of the Motivational Interviewing approach and a PowerPoint summary of the work.