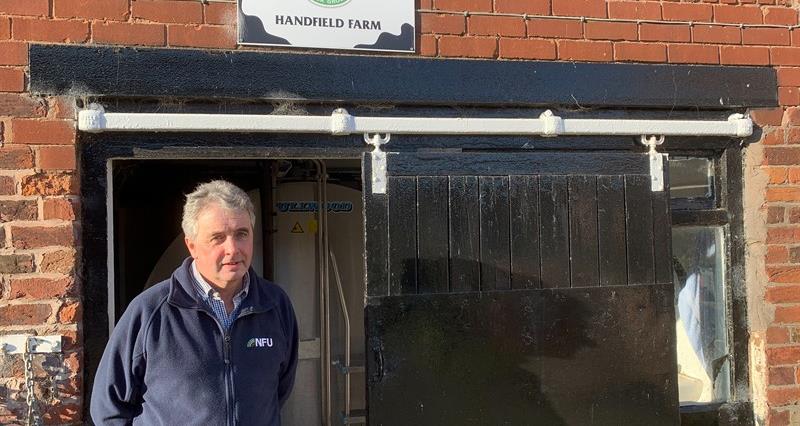 Working in partnership with son Robert (33) at Handfield Farm in Congleton, the pair milk a herd of 210 pedigree Holstein cows, with 130 followers, on a robotic system. For the last 18 months the business has been on a Muller contract supplying exclusively for the Coop.

Handfield Farm is 275 acres and consists of land mainly owned by Richard.

Born and brought up across the road at Lower Medhurst Green Farm, Richard farmed in partnership with brother Stuart, himself a former NFU Cheshire County Chairman.

After milk quotas were introduced, the Yarwood family took the opportunity of buying neighbouring Handfield Farm in 1985. Richard and wife Debbie moved into the farm house at Handfield, but the partnership ensued with dairy herds being successfully run jointly across the two holdings. This arrangement continued until 2012 when the partnership split.

Richard said: “Both Stuart and I have a son to succeed us on the two respective dairy farms, so we set about splitting up the business 10 years ago which was a tricky process to navigate but we’ve come through it successfully.

“Robert joined the business in 2006 when he was just 18 years old. He completed a foundation degree in dairy herd management at Reaseheath College on a part time basis and is now my partner. He married Jen last year who is a primary school teacher at Mossley C of E Congleton."

Richard is married to wife Debbie and the couple also have a daughter called Natalie (30) who is a digital marketing manager for a pet microchip business based in Yorkshire.

A keen supporter of Cheshire YFC where he’s held roles as chairman and secretary at Sandbach, Richard says his interests centred around stock judging, public speaking, and quizzing.

He was chairman of the Grassland Society in 2004 and has been involved with the Cheshire Farms Competition Society for more than 30 years, taking on the role as chair in 2007.

Richard added: “I still enjoy my involvement with the Cheshire Farms Competition Society, and it’s helped me build up a really good network and knowledge of the various farm businesses in this county.”

Officially taking over as chairman from current incumbent Richard Blackburn at the NFU’s national AGM held in Birmingham this February, Mr Yarwood is ready for the many challenges ahead.

Richard said: “To put my cards on the table I was a Brexit supporter who was looking for a soft Brexit and was disappointed in how the debate got polarised into a linear choice of overturning the referendum or no deal. I did not think that was a choice worth taking. Now we are all dealing with the aftermath and the introduction of ELMs.

“I am acutely aware that the loss of BPS will leave a huge hole in the finances of many extensive and upland farms. The way ELMs is being introduced leaves a lot to be desired. The two things combined creates a real problem and the NFU will fight our members’ corner.

“And on the issue of milk contracts, we have some more consultations looming about the reform of contracts, but we are still waiting for more meat on the bones.

“As NFU Cheshire County Chairman I’ll continue to promote farm safety and as deputy was pleased to help Richard Blackburn make the PTO campaign such a success. We discussed the campaign’s future the other day and I’m giving some serious thought to focussing on improving livestock handling safety during my time as chair.”