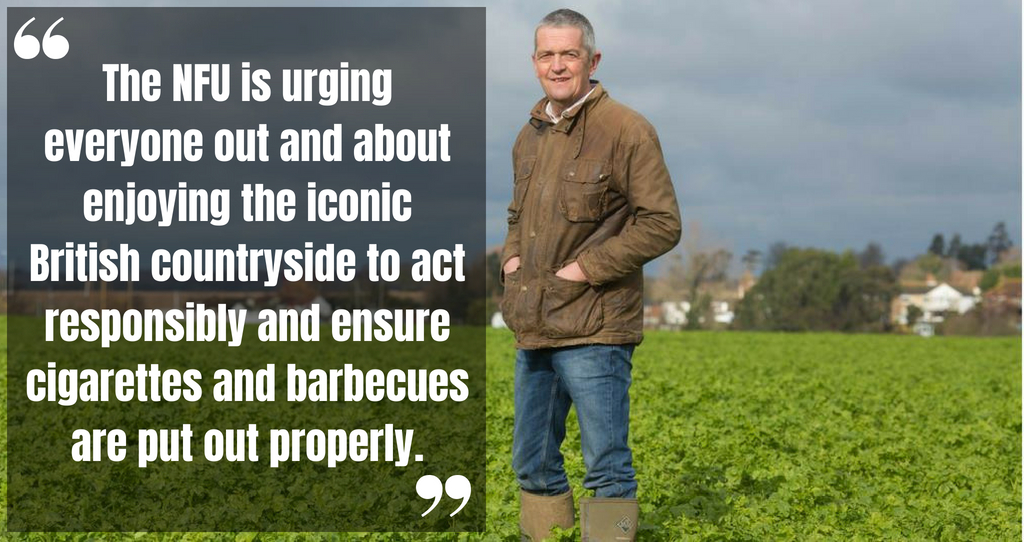 With the spell of dry weather set to continue into next week in most parts, the NFU and ramblers are urging the public to be the eyes and ears of the countryside in a bid to prevent further wild fires breaking out.

There are also calls for National Park authorities, local authorities and AONBs to do more to mitigate the risks of fire by taking actions such as strategically placing water bowsers and increasing the number of wardens in areas where people regularly access the countryside.

NFU Deputy President Guy Smith said: “With much of the country affected by this remarkable run of weather - hot weather, high temperatures and lack of rain – we’re seeing widespread tinderbox conditions.  That’s leading to a significant increase in the numbers of wild fires such as the ones on Saddleworth Moor, Winter Hill and Marlow and that risk is only going to increase as crops ripen over the next two weeks.

“The NFU is urging everyone out and about enjoying the iconic British countryside to act responsibly and avoid lighting fires and ensure cigarettes and barbecues are put out properly. Please follow the Countryside Code and report any fires or any activities which could cause fires to the emergency services.

“Farmers should also take extra precautions given the increased risk such as having checked fire extinguishers on all vehicles involved in the harvest campaign and to put firebreaks in around fields as soon as they are harvested.”

Tom Platt, head of advocacy and engagement, ramblers, said: “It’s great to be able to take advantage of this fantastic summer weather to go out walking. As always we encourage anyone enjoying our beautiful countryside to behave responsibly to help protect our environment.  As the landscape is so incredibly dry, it’s more important than ever to be extra vigilant for fire risks. Walkers can help by keeping an eye out for things like broken glass that can start fires and reporting any fires that appear to be unattended as quickly as possible.”

Mr Smith added: “We also want National Park Authorities, councils, AONBs and Natural England to work in partnership to mitigate the risks. The NFU has already worked with a number of local authorities to place water bowsers in strategic places where the public regularly access the countryside, or increase the number of wardens who are able to monitor the risk of fire. But more needs to be done and these actions must be rolled out nationally as a matter of urgency.

“The NFU also believes that there must be an urgent review of the fire severity index, which determines when some areas can be closed due to fire risk. Numerous areas of the country have experienced exceptional fires this summer which this index has not recognised. This demonstrates the need to review the index to ensure that those areas can be closed in exceptional circumstances in the interest of the safety of the public, landowners and occupiers.”