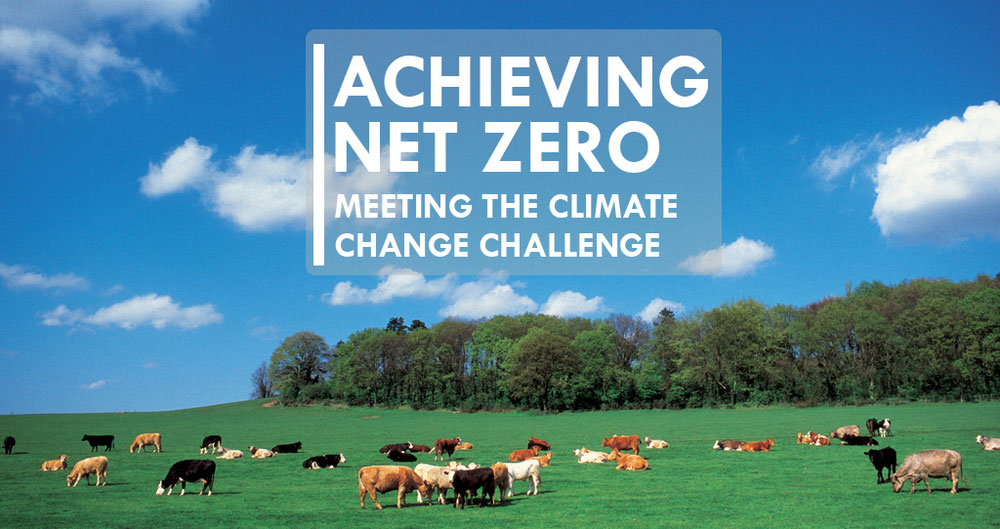 The NFU has outlined the policy, mechanisms and support required from government and other stakeholders in order for agriculture to meet the NFU's aspiration of net zero by 2040.

This page provides an overview of:

Use the anchor links below to jump straight to a section:

Why is it so important to act now?

At the Oxford Farming Conference in January 2019, NFU President Minette Batters announced the NFU’s ambition to achieve net zero for agriculture by 2040.

Mrs Batters made it clear at a meeting of the NFU's Council that this aspiration for net zero should not reduce farmers’ ability to produce high quality, affordable British food or reduce farm income. Equally, the UK must not achieve its climate change ambitions by exporting UK production, or greenhouse gas emissions, to other countries.

In June 2019, the UK became the first major world economy to set a target for achieving net zero on greenhouse gas (GHG) emissions into law, with then Prime Minister Theresa May committing the UK to net zero emissions by 2050.

With the industry, and domestic agricultural policy now at such a turning point, the NFU believes it is vital that farmers and growers are at the forefront of shaping how future climate change policy is delivered.

For the past 10 years, NFU climate experts have led talks across industry and government to discuss ways of reducing the greenhouse gas emissions produced from agriculture.

How is agriculture part of the solution to climate change?

Climate change is arguably the greatest environmental challenge facing the world and British farmers are in the frontline of increasingly frequent weather extremes.

Agriculture is uniquely placed to be part of the solution to climate change, as it is both an emissions source and a sink. The diagram below shows how farming processes capture carbon dioxide (CO2), from the air and turn it into a wide range of foods, fibres and fuels. Farmers also have the ability to protect carbon reserves already present in soils and vegetation.

Emissions from UK farms currently amount to about 10% of UK GHG emissions. But in stark contrast to the rest of the economy only a tenth of this is carbon dioxide. More than half of agricultural GHG emissions are methane (CH4) and nearly 40% are nitrous oxide (N2O). Reducing these emissions is more difficult than cutting carbon dioxide, because they result from complex natural soil and animal microbial processes.

But by enhancing the ability to capture carbon, we can use it to generate ‘negative emissions’ – actively removing CO2 from the atmosphere to balance the CH4 and N2O emissions from food production. 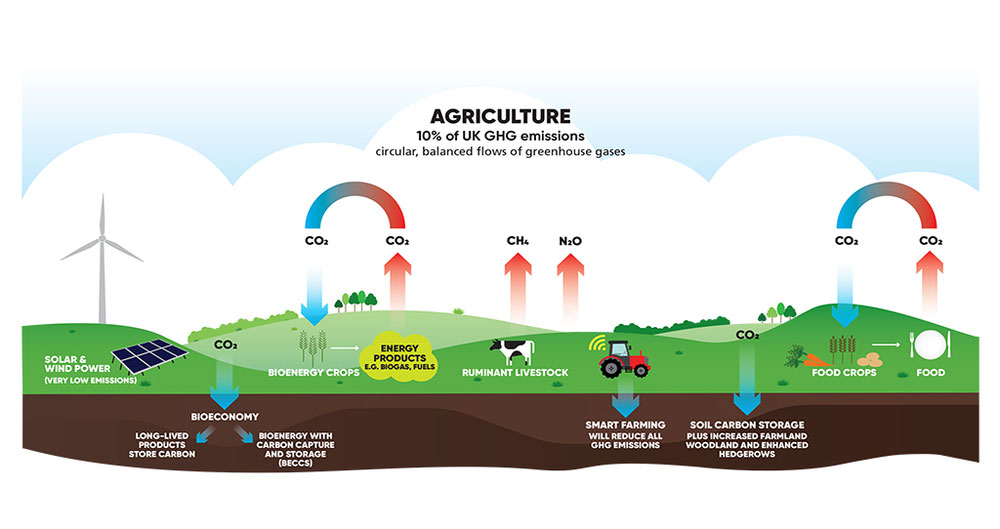 On 10 September 2019, the NFU published a report outlining its approach to achieving this climate neutral goal for farming, and crucially the specific policies, mechanisms and support required from government and other stakeholders in order to help farmers work towards achieving the target.

Achieving Net Zero: Farming’s 2040 Goal was launched to stakeholders at an event at the NFU's office in London with a call for support from government, industry and other key groups to work in partnership to help deliver this challenging ambition.

The policy measures needed to enable UK farming to meet the NFU's net zero aspiration will require a partnership approach. Uptake by farm businesses will need to be accompanied by concerted support across government departments, agencies and other stakeholders to act with us and help us deliver on this ambition.

There is an urgent need now to pilot our aspiration with support from government and other stakeholders, bringing net zero to life for the farmers and growers who are critical to its success. The NFU's initial pilot proposals aim to develop a farmer-friendly framework for monitoring and reporting tools, to boost confidence that changes in on-farm practice are being captured. Such a framework might be validated and confirmed with reference to a field testing farm network, and backed up by actual physical measurement across a small sample of the total. What can I do?

The NFU’s report makes clear that the 2040 ambition is a national aspiration, not an expectation that every farm can, or will, reach net zero. Every farm will start the journey to net zero from a different place and will need a unique action plan. The first step is to assess the likely emissions sources on farm.

“Marginal gains are vital. Activities such as improving livestock health, reducing soil compaction and well-placed shelter belts or windbreaks are good for farm businesses and also reduce greenhouse gas emissions. Many farmers will already be doing some of these things as part of their everyday role. But we need many more to step up to the plate.” 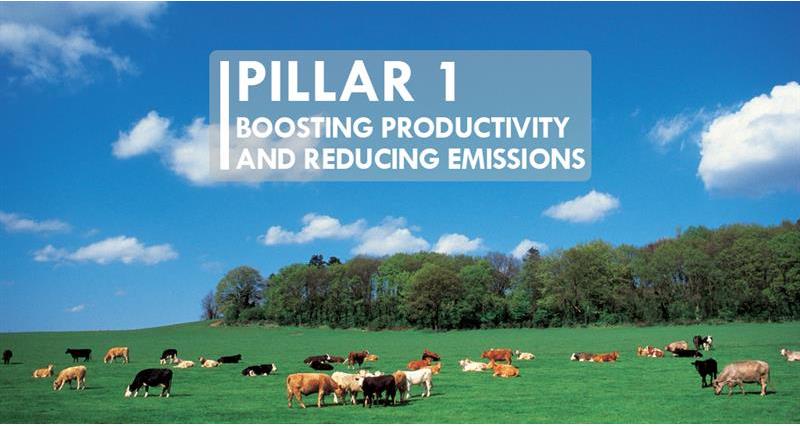 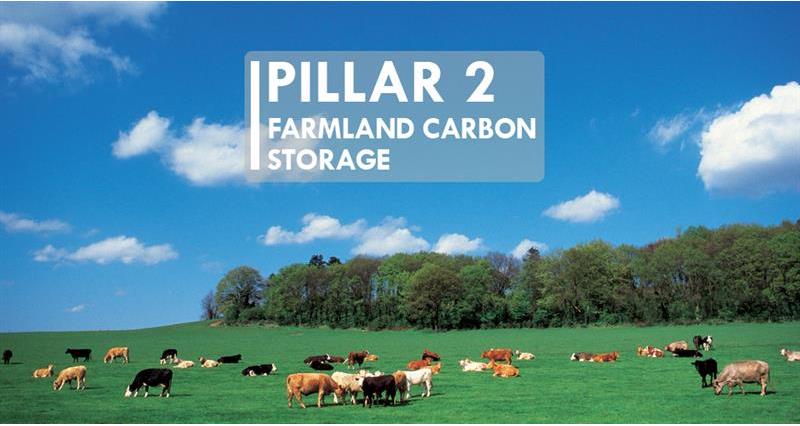 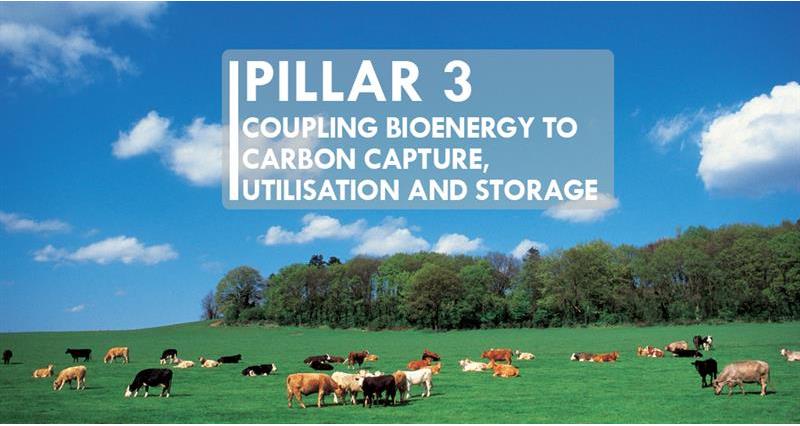 Boosting renewable energy and the bioeconomy to displace greenhouse gas emissions from fossil fuels and to create greenhouse gas removal through photosynthesis and carbon capture. 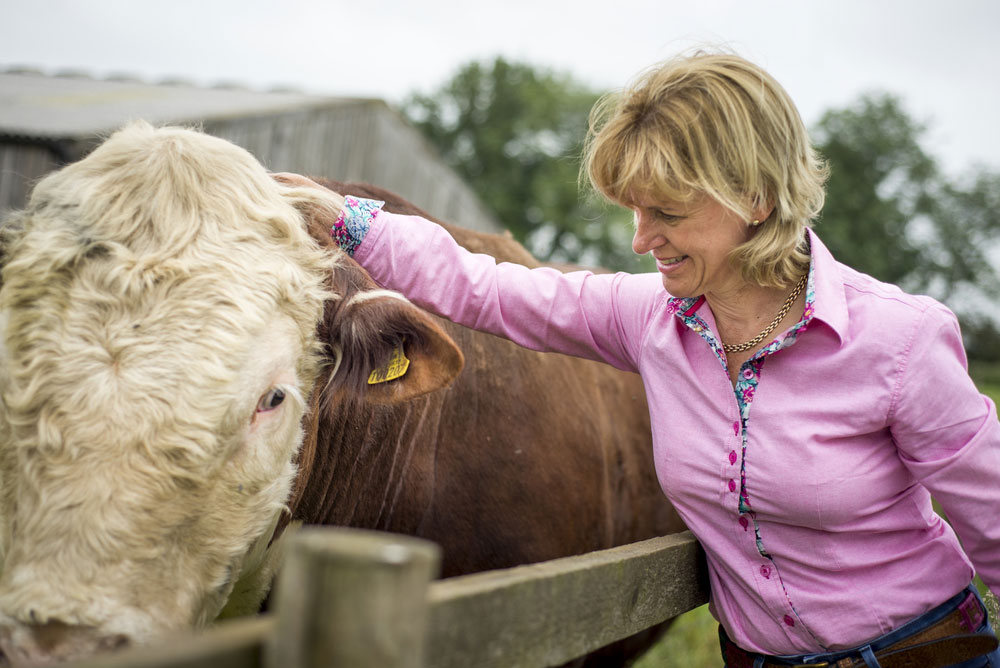 “I know the future on my farm has to be about holistic farm management - not organic versus conventional, but sustainable farming practice that focuses on building soil health.

“Our mixed rotation is focused on continually striving to improve grazing pasture, introduce more clover and herbal leys which help to fix nitrogen so we use less fertiliser, and GPS technology is supporting our ability to precision farm.

“I’m confident that new feed additives and minerals will also help further reduce methane and regular benchmarking ensures I’m getting the best performance and productivity out of my livestock. Focusing on health status and the right genetics are key to carbon neutral farming.”

The NFU’s net zero steering group first met in April 2019. It consists of a member of each NFU national commodity board and forum and is chaired by John Davies, NFU Cymru President with support from Guy Smith, NFU Deputy President. The steering group drives all aspects of the NFU’s work on net zero and provides the opportunity for detailed technical discussion. 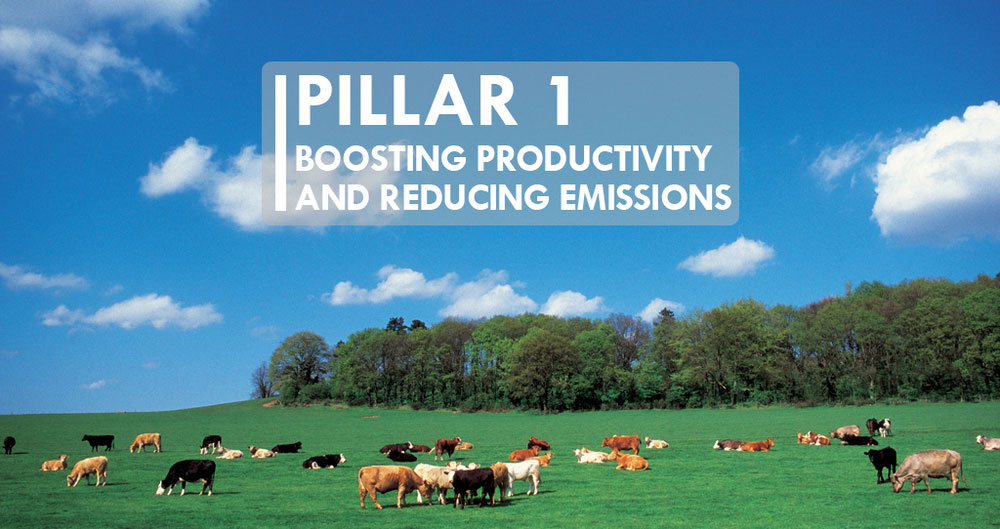 Improving farming’s productive efficiency will enable farmers to produce the same quantity of food, or more, with less inputs, in smarter ways. This, in turn, will enable the sector to reduce its total greenhouse gas emissions.

A variety of measures can boost productivity and reduce emissions, including: 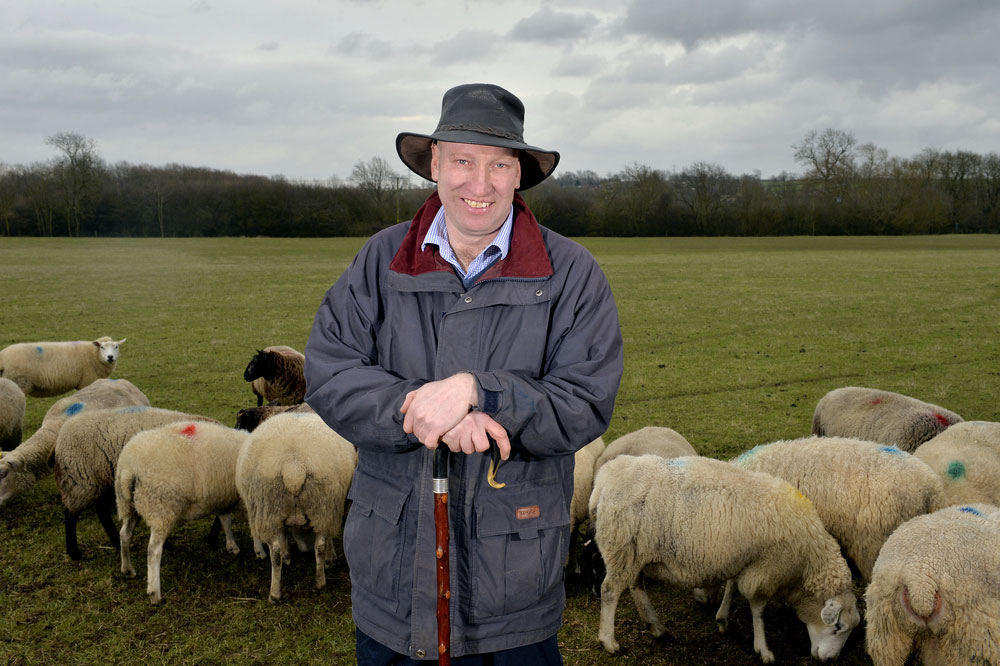 What? Mr Sercombe has used technology such as EID (electronic identification) readers to rigorously record and trace information about individual animals. He has also introduced new genetics through dedicated breeding to improve his flock.

Why? Extensive use of performance recording has enabled a focus on traits such as fecundity, mothering ability and growth rates. As a result, he has reduced the time taken to fatten lambs by up to 30 days. Reducing finishing time improves the GHG emissions profile of the business and the increased data collection allows for the precise application of feed rations and inputs, which reduces waste. Mr Sercombe's streamlined data collection has also enabled improvements in benchmarking for both physical and financial flock information. Moving in this direction has boosted the reputation of Mr Sercombe's business. He sells high-quality breeding stock into many markets and has had numerous successes in the show ring.

Next steps? “To help deliver long-term profitability, the sector needs access to more reliable data if we are to drive productivity, reduce emissions and meet the demands of the domestic market, as well as new and developing export markets,” Mr Sercombe said. “Connectivity is vital to allow the benefit of information and technology to be felt by every farm business. Without superfast broadband and mobile coverage the UK risks leaving many UK farmers behind.” 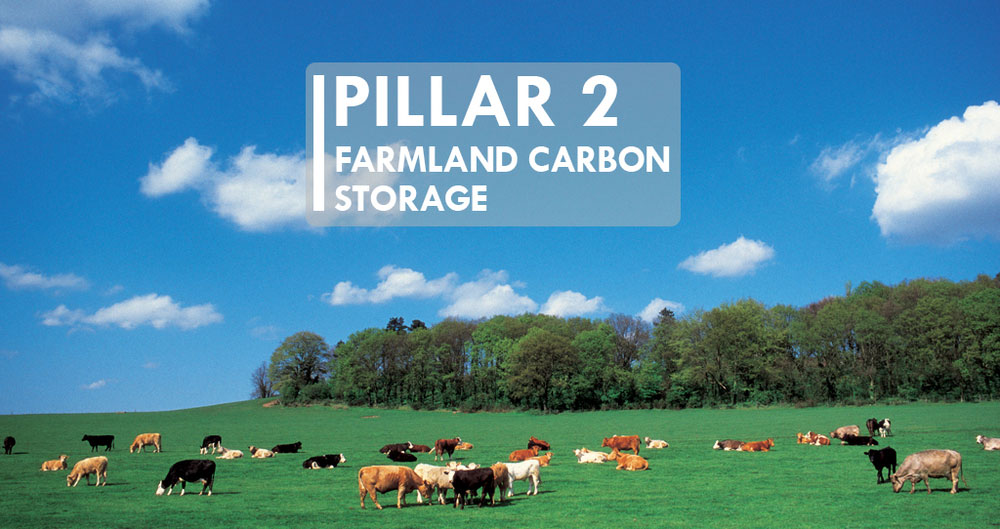 Farming is already responsible for a critical carbon resource in soils, wooded landscape and semi-natural habitats. The achievement of net zero should actively incentivise the conservation of this carbon resource as well as its enhancement.

This conservation and enhancement can be achieved through improving land management and changing land use to capture more carbon – through bigger hedgerows, more trees and especially more soil organic matter. 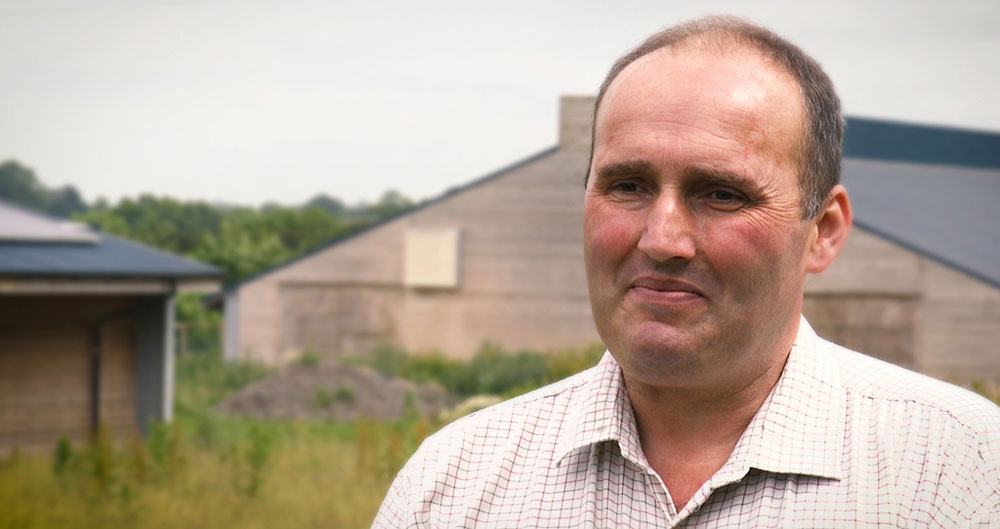 What? Mr Crawley has planted 65,000 trees on around 100 acres of land. He plants fast-growing poplar and willow trees close to his poultry sheds for the cover they provide quickly. Further away, he has planted slower growing native species, such as oak.

Why? Mr Crawley planted these trees because of the natural shelter and foraging opportunities they provide for his chickens, as well as the benefits for the environment.

Next steps? Mr Crawley plans to plant more trees, but if planting was also to be encouraged financially, he would consider establishing even more. "As well as minimising a farm's carbon footprint, trees have great benefits for the welfare of the birds," he said. "The shelter encourages them to roam and feather cover has also improved, which helps keep egg colour in hot weather and helps insulate the bird in the winter. There's also a benefit in showing the public the positive impact of what we're doing. I would like to carbon footprint the business to see what impact the trees have had and what else could be done." Boosting renewable energy and the bioeconomy to displace greenhouse gas emissions from fossil fuels and to create GHG removal through photosynthesis and carbon capture is a key part of the NFU’s ambition for achieving net zero.

Bioenergy with carbon capture and storage (BECCS) – the process of producing energy from organic matter and capturing and storing the carbon produced – could deliver significant GHG savings. Implementation of the industry-led Bioenergy Strategy by BEIS, a clear carbon price trajectory and multiple demonstration projects at different scales will be needed to achieve this.

There are a number of ways that NFU members are already implementing measures on farm to generate renewable energy. 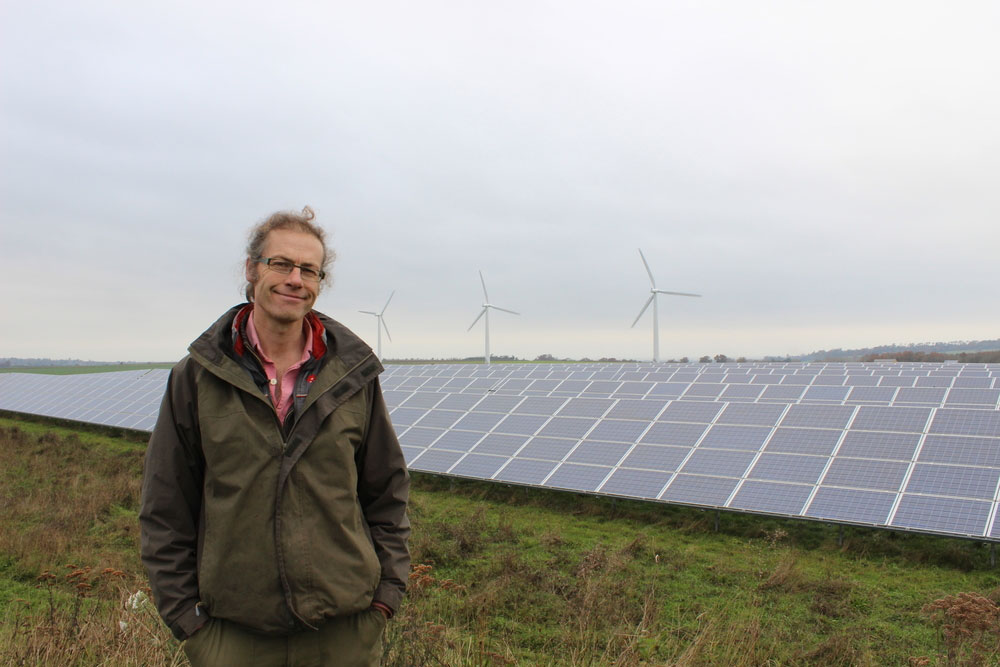 What? Five 50 metre-tall wind turbines on Mr Twine's farm generate 11 GWh per year. This goes back to the grid and supplies an average of 2,500 houses. The solar farm generates electricity for around 1,500 houses. He also has PV solar panels on the roof of one barn, the electricity from which is used to run his dairy parlour, with the excess energy going into the grid. In 2009, Mr Twine set up the Farm Carbon Cutting Toolkit (FCCT) to look at how he could translate environmental improvements into a farm practice advisory service.

Why? “Having a wider and longer term perspective is really crucial. Correlate your actions on farm with how you want the future to look.”

Next steps? Mr Twine is working on battery storage for wind and solar. He also wants to continue to develop the FCCT and to build a database of soil organic matter measurements across the country and understand how these are changing under different management regimes.