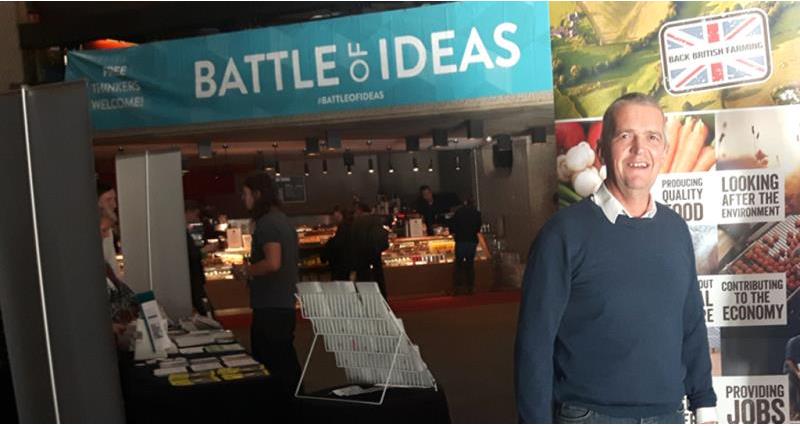 NFU Vice President Guy Smith has taken part in a debate organised by the Institute of Ideas on how Britain will feed its population after Brexit, writes Verity Richards.

One of a series of discussions as part of the wide-ranging “Battle of Ideas” event, the session at the weekend offered an opportunity to engage with a new audience and to bring to wider attention the issues facing the industry and the importance of agriculture in ongoing Brexit negotiations.

See also: National food policy at the Battle of Ideas

Guy was part of a panel including Green Party MEP Molly Scott-Cato, Prof Tim Benton of the UK Global Food Security Programme and British Summer Fruit’s Laurence Olins. He began by asking if we should “seek to feed ourselves from imports or own resources?”.

With global issues such as climate change, rapid population expansion and political instability constantly in the news, over-dependence on other countries could be considered dangerous, in Guy’s words, “reckless”.

If Britain is to feed itself then there need to be stringent measures in place to ensure farming is not only a viable profession – especially if unsubsidised – but also “robust and vibrant,” he added.

The debate went on to emphasise the fact that if the UK is to stay committed to high welfare and environmental standards there needs to be a level playing field  - we cannot import cheaper food which is not produced to the same rigorous standards.

The discussion pointed out that the UK is undoubtedly part of a globalised food system; many of the products we eat contain ingredients from all over the world and, according to British Summer Fruits, we import three million tonnes of fruit and vegetables every year.

Mr Olins emphasised the importance of Britain having access to the single market and the problems that will occur if lorries transporting fresh produce cannot enter Britain easily – including increased tariff prices and long delays at border controls.

Ms Scott-Cato called for continued monetary support for farmers, but on an environmental not a land basis. She also supported calls for re-wilding - although not to the same extent as the commentator George Monbiot.

While farming in a sustainable manner is extremely important, and something many farmers already do, some audience members protested that it cannot be at the expense of viable food production. As Guy said: “If you re-wild large tracts of good British farmland, you will have to import more food.”

Rounding off the debate, Guy said that instead of seeing Britain’s exit from the EU as a threat, we should be asking how we can make the most of this opportunity.

“It is important not to isolate ourselves from Europe and we need to look to the opportunities that arise in this period of change and uncertainty,” he said.