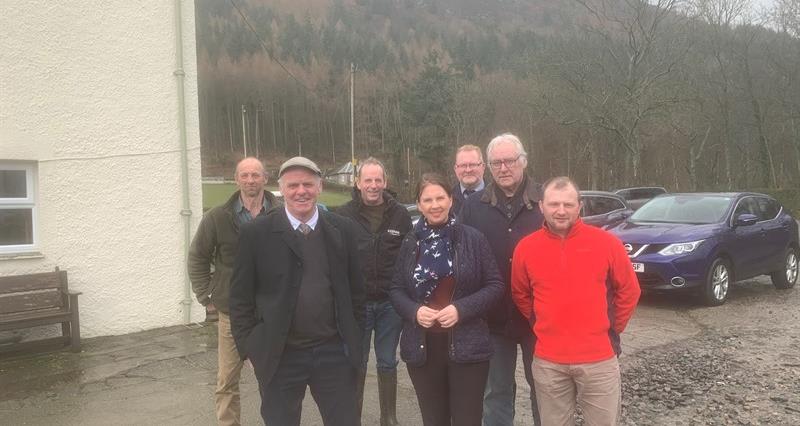 Concerns about surging input costs on farm and the need for our country to think more about food security, inevitably hung in the air as NFU Cumbria County Chairman Ian Bowness and a band of Cockermouth members awaited the arrival of Trudy Harrison MP.

Convened initially to discuss concerns about United Utilities’ water pipeline project, the invasion of Ukraine by Russia and the ripple effects it was already causing were difficult to ignore.

Agricultural supplier Carrs Billington had quoted Mr Bowness 120ppl for red diesel - three months ago that price had been 60ppl.

Mr Bowness told his fellow farmers that Carrs had limited him to purchasing 500 litres.

“I can get two days work done on that amount and then I’ll have no diesel on the farm,” explained Mr Bowness.

Cue an awful lot of head shaking and worried faces around the table at Sandhills Farm in Keswick where the Friday afternoon MP meeting was about to take place.

Bright and bubbly the Conservative MP for Copeland arrives straight from a visit to a hospital in the town and, to her credit, is ready and willing to listen to her farmer constituents.

Conversation quickly turns to food security concerns and upland sheep farmer and former NFU Cumbria County Chairman Will Cockbain asks what message Secretary of State George Eustice MP will be taking to an international level meeting Will believes he is attending.

Its news to Trudy, who is currently Parliamentary Under Secretary of State at the Department of Transport, and she asks her aide to check George’s twitter account to see what he’s up to.

You can tell that using the social media platform for bringing yourself up to speed with the whereabouts of ministerial colleagues is a first for many of the NFU members sat around the table, but this is now the fast-paced world of modern politics.

As it’s primarily a constituency gathering, Trudy is rightly keen to get stuck into the issues locally and this is where the members manage to explain their concerns with well-informed evidence, resulting in a series of commitments from their MP.

Three important commitments are gained as a result of the get-together.

Firstly, Trudy is happy to hold a meeting with local land agents who have been working on behalf of farmers whose land has been adversely impacted by the United Utilities pipeline. This meeting will need to include a senior representative from United Utilities and will also look into the long-term drainage issues currently being faced due to the soil and sub soil disturbance.

Secondly Trudy has agreed to contact Defra colleagues to push for the reductions of the BPS payments to be put on hold for 12 months so the impact of the commodity prices can be assessed. It should be noted that the official NFU policy ask is for an immediate pause to the phase-out of direct payments for two years, but members present thought 12 months was probably more achievable.

Thirdly there was agreement that some form of Cumbria wide Food Security Council to look at the rise in inputs and the impact on self-sufficiency may be helpful. Trudy agreed to further discussions about this idea.

While discussing United Utilities, before Trudy agreed to chair a meeting between interested parties, host John Langcake said: “The pipe has gone through the middle of all our fields. We were told it would take between 12 and 18 months to get our land back. It’s now five years and has really adversely affected drainage.”

Trevor Kitching of Sykes Farm in Keswick added: “They have damaged all of the soil structures. Four to six inches were taken off the top soil.”

Ian Bowness summed up: “Can we get the drainage issue back on United Utilities’ radar and our land back to the way it was before? United Utilities need to meet with our land agents who will direct both you and Mark Jenkinson (the MP for Workington) in the right direction.”

And on the subject of food security, Paul Barnes of Blackwood Farm in Braithwaite near Keswick told Trudy why nitrogen fertiliser is so important.

“One tonne of nitrogen will give you roughly 23 tonne of crop,” explained Paul.

“We need help. A lot of folk swing off the tail of a cow in this area.”

Indeed, they do and Trudy’s willingness to raise their concerns at the highest levels could be vital in the testing months which lie ahead.