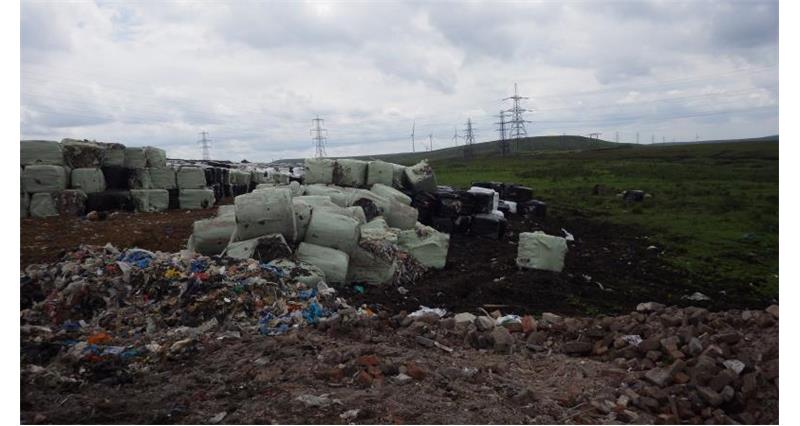 Image taken by the Environment Agency at a site in Lancashire

Over the past two months there has been an increase in the illegal deposit of baled mixed municipal waste, badged under the term of RDF (Refuse Derived Fuel) at farms in the North West - especially in Cumbria and Lancashire.

Landowners are being approached by males with a request to store the bales for a number of months whilst ‘an energy plant is in place’ at which point the bales would be collected. Farmers have been offered between £600 to £1200 for 3 months' storage.

Andy Coleman from the Environment Agency said: “Whilst this may sound appealing to landowners/farmers, it is not legal. There are no permits in place to regulate this activity. The bales are poorly wrapped and are often split when delivered causing the contents to spill out.

"There is a high risk of waste fires and fly infestations due to the waste not being stored in the correct manner.  Consequently, farmers are putting themselves at risk of enforcement action being taken against them if they allow the storage to take place. Any farmer who has been approached to store such waste or is currently storing such waste is urged to contact the Environment Agency via our 24 hour incident hotline 0800 807060.”

There is a strong suspicion that the bales will never be collected thus leaving the landowners with an expensive clearance bill.

Adam Briggs, Lancashire County Adviser for the National Farmers’ Union (NFU), said: “Farmers need to keep in mind their duty of care with regards to waste and the paperwork requirements. An environmental permit or waste exemption is needed to store or use waste material.

"If farmers are asked to store baled mixed municipal waste even on a short term basis, they should refuse the material and contact the Environment Agency to seek further advice.”